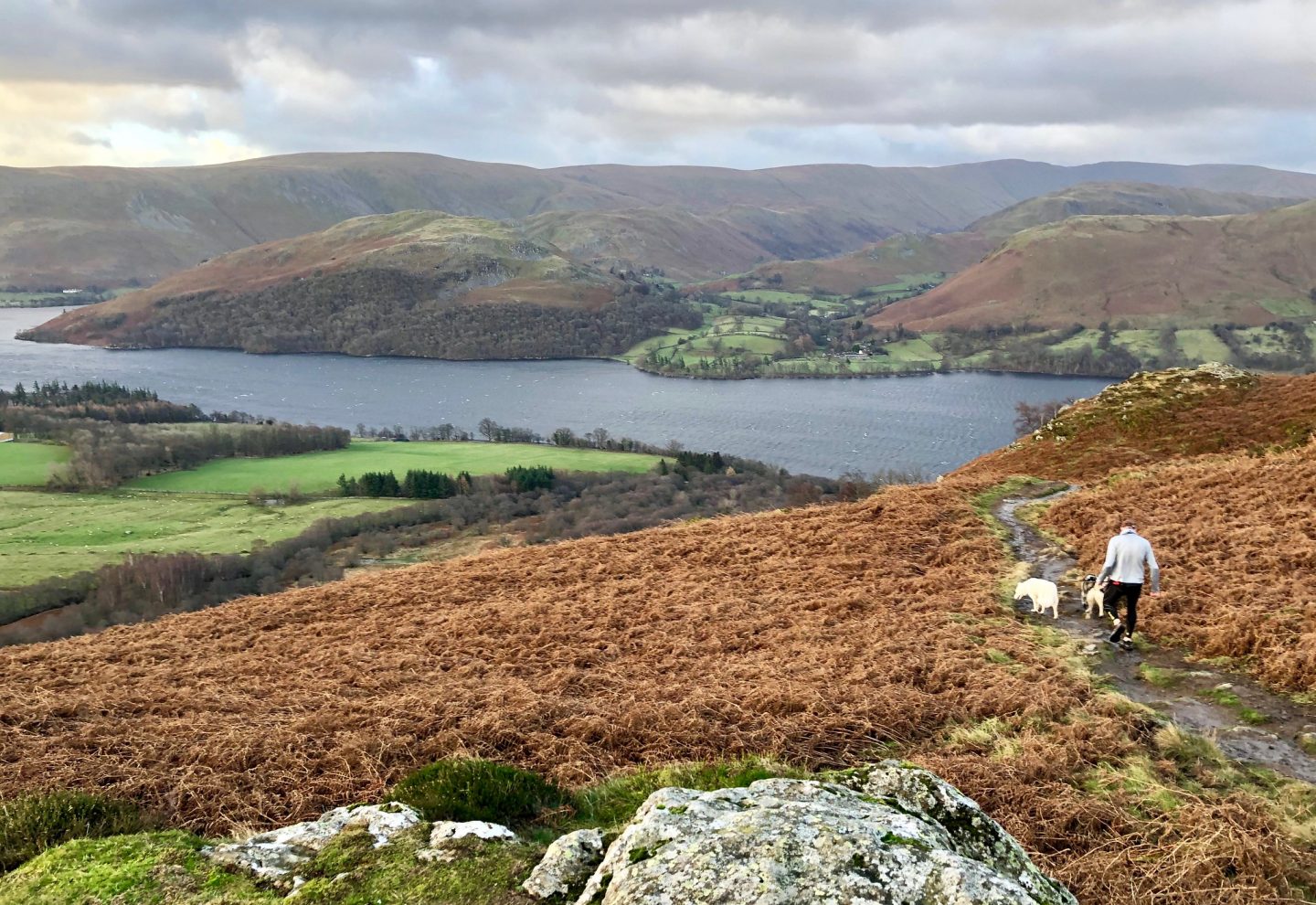 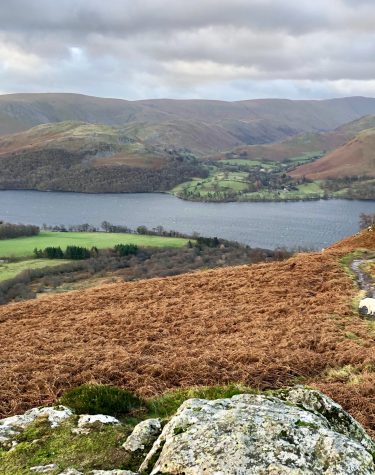 A Day Out in Ullswater

Owning a caravan at Hawthorns means you are only a few miles away from some of the most stunning scenery in the Lake District. In this article we take a closer look at Ullswater – just over an hours drive away from the park – making it a great place to explore for a day out. Pack your walking boots and camera and off you go!

Ullswater is the second largest lake in the Lake District covering eight miles of curving shoreline through amazing mountainous scenery.

If you have visited Ullswater before you know it has a timeless beauty all of its own. Its name is believed to have been derived from the Vikings as they settled in the area – with evidence of a stone circle known as the Cockpit on Barton fell.

Ullswater has been home to many famous events over the years. Not least, William Wordsworth, who was a frequent visitor to the area and his poem the Ullswater Daffodils, was inspired by one of his stays. It is rumoured that he was in the White Lion Inn in Patterdale when he heard of Nelson’s victory at the Battle of Trafalgor in 1805. During the second world war, Ullswater was used as one of the training grounds for the famous Dambusters – who tested their aiming devices on the lake.

During the 60’s Ullswater was almost turned in to a reservoir as the need for water in surrounding cities grew. Lord William Birkett stated a robust campaign to fight the looming parliamentary bill and on 8th February 1962 successfully defeated it. In memory of his success the Ullswater Yacht Club hold the Lord Birkett Memorial Trophy Race every year – where over 200 yachts take to the water to compete on the first weekend of July.

One of the highlights of the event is where family and friends are invited on a special trip on board of the Ullwater Steamers – MV Raven on Saturday – and they can follow the racing at close hand and experience some of the excitement.

The Ullswater Way is a 21-mile circular route around the lake. You can walk in either direction, and take in all the sites and attractions as you go. Download a copy of the Ullswater Way map. 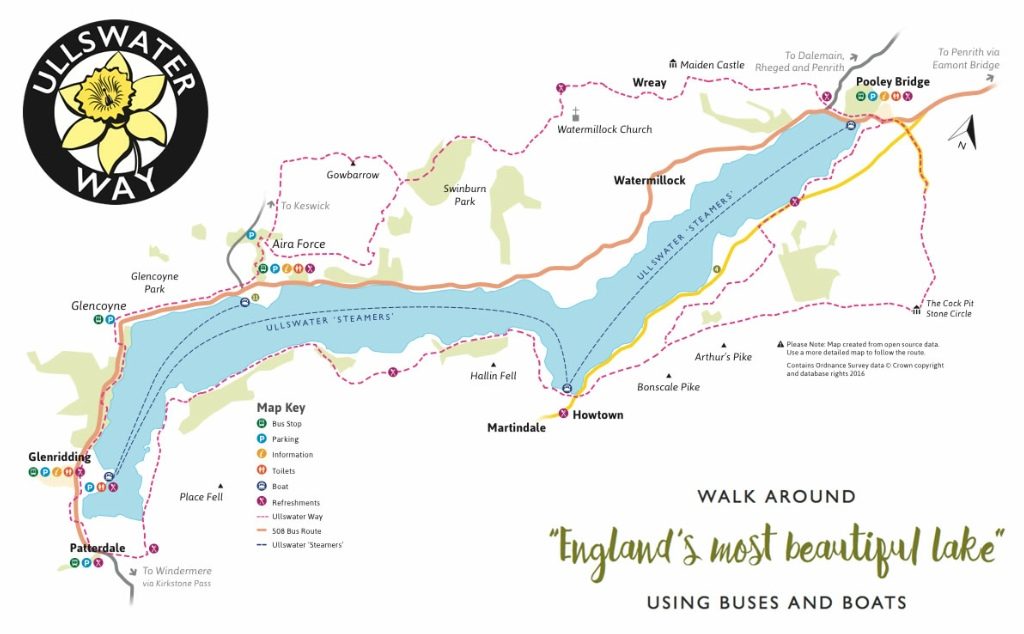 As you travel around the lake you will come across several villages:-

Glenridding lies at the southern end of Ullswater in the Lake District. The village grew up around the Greenside mine which now forms the Helvellyn Youth Hostel. The village itself hosts a good range of local shops, cafes, and restaurants, as well as local attractions such as the Ullswater Steamers and the Glenridding Sailing Centre.

The hotels all offer excellent food, with the Inn on the Lake – Lake View Restaurant having 2 rosettes. There is also Fellbites, a cafe and restaurant serving good food throughout the day and some evenings. Fairlight Guest House also has a cafe open all day, as does Let It Brew Coffee Shop, attached to the Glenridding Hotel.

On teh afternoon of Saturday 5th December 2015, Storm Desmond hit the Lake District and caused havoc throughout Glenridding and the surrounding villages. Glenridding beck burst its banks and and started freely flowing down Eagle Lane and right through the Glenridding Hotel bringing with it tonnes of gravel and stone from landslips al the way up to Helvellyn.

Such was the ferocity of the storm that the lake road between Glenridding and Patterdale was underwater for three days.

Glenridding is home to the Ullswater Steamers who run regular cruises across Ullswater to Howtown and Poolev Bridqe. The Glenriddinq Sailing Centre also offer boat hire and sailing tuition.

If you are walking up Helvellyn (or one of the other Eastern fells in the Lake District) then Glenridding is the perfect place to leave the car.

Helvellyn is the 3rd highest mountain in the Lake District and England (950 metres or 3117 feet) and was recently voted Britain’s most popular walk in a poll.

Bizarrely, in 1926, an aeroplane was flown up to the summit, and managed to land and subsequently take off again.

The Helvellyn range is extremely massive and forms a large natural barrier from north to south between the troughs of the Thirlmere and Ullswater valleys.

Helvellyn is no doubt one of the most popular mountains to conquer in the Lake District and the easy paths leading up the western flanks make it particularly suitable for the novice hiker.

One of the most famous routes is the ascent from Patterdale via Striding Edge which Wainwright described as `The finest way of all to the top of Helvellyn …giving newcomers and novices a thrilling first taste of real mountaineering’.

This route ascends approximately 2700ft and covers five miles. It passes Red Tarn on your right and then continues along Striding Edge to the summit. The summit is marked by a small cairn with the best view being of Red Tarn and Striding Edge below.

Other routes start from Grasmere, Glenridding, Wythburn and Thirlspot so there is no shortage of paths to choose from, although an eastern approach is recommended for better views (from Glenridding, Patterdale and Grasmere).

Take care if you are embarking on a walk up Helvellyn – guided walks are available locally, and always check the weather forecast.

Patterdale can be found just beyond Glendridding at the southern end of the lake. The village has a village store and post office that offers a range of food and local gifts. The shop is open 7 days a week for packed lunches and local ice creams 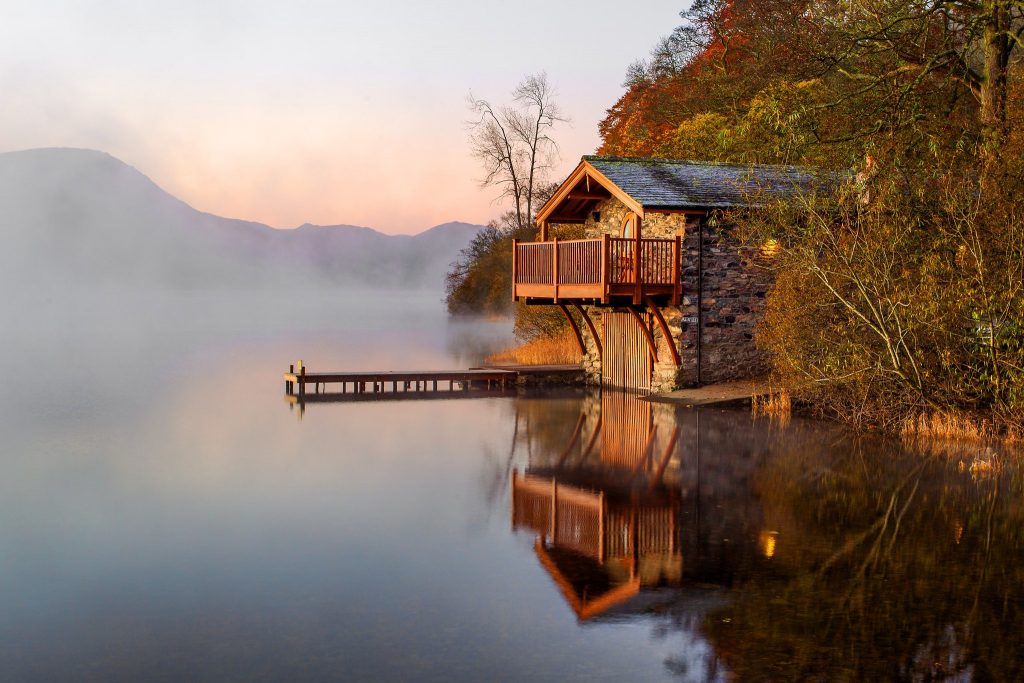 Pooley Bridge lies at the northern end of Ullswater and is very popular with visitors given its accessibility to the M6. The Ullswater Steamers stop here as they travel round the lake.

There are a number of pubs including the Sun Inn, The Crown Hotel and the Pooley Bridge Inn that serve food and drink throughout the day.

Its narrow 16th-century bridge straddled the River Eamont as it flows out of Ullswater but was washed away during the floods that affected Cumbria in December 2015.

Standing on the western shore of Ullswater, between Glenridding and Pooley Bridge you will find the small hamlet of Watermillock. The village has a thriving community with local church and village hall.

Howtown is a quiet hamlet on the eastern side of Ullswater, about 3.5 miles from Pooley Bridge. It is also one of the stop-off points for the Ullswater Steamers on their cruises around the lake.

The walk back from Howtown along the eastern edge of the lake to Patterdale is on of the most popular lower level walks in the area.

Martindale is even further around the eastern edge of the lake and is a stunning remote hamlet with a beautiful 17th Century Church. This is a truly special place for those looking to enjoy rural peace and tranquillity at it’s best.

Aira Force is a beautiful waterfall in woods on the hillside near the banks of Ullswater towards Pooley Bridge. Park up in the little car park on the A5091, and a short walk into the woodland to the falls is still necessary.

For the best view, go down the steps to the bottom of the waterfall, looking up at the little stone bridge straddling the river. This Ullswater highlight is not to be missed!

The steamers on Ullswater have been operating along the lake for over 150 years. The main piers are at Glenridding in the south and Pooley Bridge in the north. Howtown and Aira Force provide further stopping points.

This centre is located close to Pooley Bridge at the north end of the lake. Luxury motor boats, canoes and row boats are all available. Along with the appropriate safety equipment of course. Safety boats are also on patrol during opening hours in case you should get into difficulty. Boat hire is available elsewhere on the lake, including at St. Patrick’s Landing Ground near Glenridding, where you can also hire bikes.– http://www.lakelandboathire.co.uk

The simplest route by car to Ullswater is to leave the M6 motorway at junction 40, and follow the signs at for Keswick on to the A66 before quickly leaving that road for the A5091 towards Pooley Bridge.

However, if you are travelling from Hawthorns Caravan Park and want to take a particularly scenic route to the area, leave the M6 motorway at junction 36 and pass by Kendal, continuing towards Windermere and Ambleside on the A591, before switching to the A592 through Troutbeck just after Windermere village.